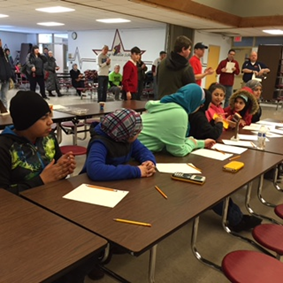 The Dearborn Academy participated in a Math Competition on Saturday, February 13th, 2016.

10 of the Academy’s Middle School students participated in the Math Competition.

Thanks to all the efforts of Mrs. Karazim with her After-School Math Club.

One of the Academy’ 8th graders, SH, made it to the final round and put up a good fight.

The Dearborn Academy was recognized as a newcomer and received a trophy, which will take its place of honor in the vestibule showcase on Wednesday Feb. 17, 2016.

Much appreciation goes out to Mrs. Karazim for her time, attentiveness and persistence throughout the year.  Her determination paid off as our kiddos made us all so proud.  Thank you also to Mr. Mike Burton for getting to school super early to make sure the bus was toasty on the coldest day of the season.  You rock, Mr. Mike!

Please take a moment to acknowledge Mrs. Karazim and Mr. Mike for championing our kiddos as well as our math club students for all their conscientious endeavors.